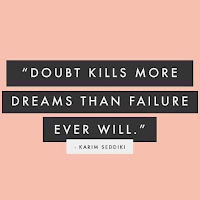 Doubt has been overtaking the dreams and visions of so many people. It’s time to let it go! I was listening to someone I follow on Periscope and she talked about having two people she knew recently die. Sad yes, but listen to the point. Both individuals were between 30 and 34 years old. Wow! Tomorrow is not promised to anyone. Yes, we hold on to dreams and we tell ourselves that we’ll move on them later. We don’t belief that we’re ready. We don’t believe we’re smart enough, fast enough, rich enough, etc. We’ll follow our dreams when we have more education, more money, more time, more partners, more, more, more. But the reality is that you may not have a chance to get more.


In Judges 6, Gideon is having a talk with the Lord after he received a directive from the Lord. Verse 15 reads, “But Lord,” Gideon asked, “how can I save Israel? My clan is the weakest in Manasseh, and I am the least in my family.” Gideon offers a reply to the Lord which immediately begins with the word “BUT.” “BUT” is a word that grammatically can be used in multiple ways. It can be a conjunction, a noun, an adverb or a preposition. Used differently, can create different meaning. In this passage of scripture, “BUT” is used as a noun, which denotes an argument against something or an objection.
Gideon heard from the Lord, but was ready to argue against what the Lord had just spoken to him. When do you find yourself using the nasty “BUT” word in this same way? In Gideon’s case, he wanted the Lord to know what he saw as his reality. He doubted himself. He felt weak and felt like he lacked credibility. He also considered his position within his family and recognized that his placement status was lower than all others. None of that mattered. Only what God knew to be true mattered. In the end, the Israelites defeated the Midianites under Gideon's direction. In spite of his self-doubts, Gideon had what it took to succeed. This passage reminds me that your current position doesn’t determine your potential, your purpose, your power, or your ability to produce. God makes all of those determinations.
Are you ready to get rid of your doubts and listen to God's direction and instruction?