With a human service and child welfare background, I know firsthand that this story is one in a million. But we also see it every day.


If you're like me, you sometimes find your escape in movies and television series. Instead of spending time in your own realities, you spend time watching scripted realities. It's an opportunity to disengage ourselves from the characters on the screen. It's a way to passively accept or criticize the situations presented. Some may even overlook the pain that has been re-ignited within us.
Television series portray it all. Adultery. Church drama. Infidelity. Drinking to Intoxication. Fornication. Profanity. Same-sex relationships. Addiction. Temptation. Poverty. Sexual Abuse. Abandonment. Racism. Betrayal. Domestic Violence. Depression. Criminal mischief. Corruption.
They portray the very things that we experience in our own lives. In our families. In our workplaces. In our churches. In our communities.
Many, if not all, of these things are underwritten with a need to forgive. To forgive someone who hurt you. To forgive someone who hurt themselves. To forgive a decision you chose to make. 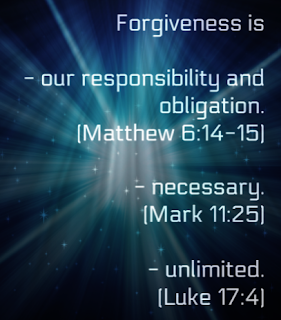 A true story of forgiveness begins in Genesis 25 with one of Abraham's sons. Their story continues for several chapters. Isaac and his wife Rebecca bore twin sons. After some grief built up within the family, deception overcame them. The youngest son, Jacob, stole the birthright that belonged to the first-born son, Esau. Although Esau was devastated at the time, as time passed, Esau's heart began to soften. Genesis 33:4 shows us this, "But Esau ran to meet Jacob and embraced him; he threw his arms around his neck and kissed him. And they wept."
That’s forgiveness!!
That's the point we need to arrive to. It's the place we need to strive to get. It's place filled with peace and love and joy.

Forgiveness is a place of freedom. You know you have arrived at this place when you, like Esau, are able to re-unite with your offender with open arms (figuratively, not literally).

Forgiveness may not be easy, but it's necessary. Check out a new song from Tina Campbell “It’s Too Hard Not To”.

Who do you need to forgive today?