I had never been to Columbus, Georgia. In fact, I had never heard of it. Imagine my surprise when I learned that there was an airport there?

In spite of my shock, I was so excited. There's nothing my God can not do ♬ When I booked my flight from the West Coast back to the East Coast, I purposefully set myself up to fly into Columbus, Georgia.

After boarding at 10:40pm for an 11:00pm departure from San Francisco, we safely arrived in Atlanta as scheduled at 6:22am.  When I looked for my connecting flight, I saw that the status was listed as "At Gate."

I was having an internal panic attack. What exactly did that mean? Perhaps it meant there was an indeterminate delay. I walked up to the gate and looked out the window but didn't see anything and there was no attendant present. After taking a short walk to pull myself together, I returned to the gate. This time, I saw an attendant and was able to ask for clarification on the status. She smiled and informed me that the aircraft was already sitting there at the gate. Upon second glance, I saw the wing peeking out from behind the jet bridge. 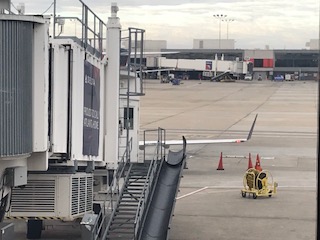 It's so easy for us to miss the little things in the midst of so many bigger things.  This was even evident in John 6:9, which reads, "There is a lad who had five barley loaves and two fish, but what are these for so many people?"

God can do much with little. Getting to this little city on this little aircraft will allow me to see my little girl dominant on the gymnastics floor.